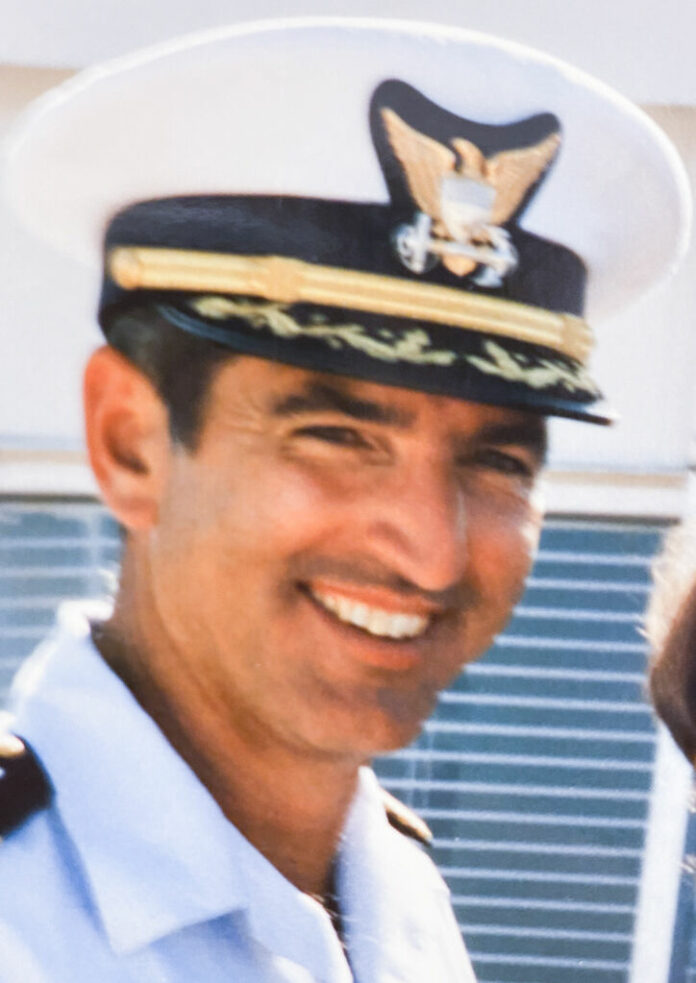 Dennis W. Parker passed peacefully on March 2, 2022, in his hometown of Cloverdale, California. Born in San Francisco to Walter and Irene (Gianoli) Parker on October 7, 1943, Dennis was raised in Cloverdale, a 1961 graduate of Cloverdale High School.  He played French Horn and was a star athlete (baseball, basketball, football). He was an avid hunter, fisherman and outdoorsman throughout his entire life.
The first time Dennis left California was to attend the US Coast Guard Academy.  He sailed the USCG Barque Eagle to Europe in 1963 and through the Panama Canal to San Francisco in 1965.  He graduated in 1966 and married Katie Wilhelm the next year.  Two weeks later he deployed to Vietnam for one year aboard the USCG Cutter Gresham.
After returning stateside, completing Naval flight training in Pensacola and USCG flight training in Mobile, he became a Search & Rescue helicopter pilot.  Dennis and his growing family (daughters Joanne and Judy) served tours in Astoria, Oregon; Aguadilla, Puerto Rico; Ogden, Utah; Kodiak, Alaska; San Diego, California; and Washington, D.C.  Through it all he continued his education, earning two Masters’ degrees (Business/Counseling) in Puerto Rico and teaching Air Force flight school in Utah.  Dennis earned several Commendation Medals, Ribbons and Meritorious Citations during his career.  He was especially proud of his Air Medal earned for a July 4, 1978, rescue in Kodiak.  He cherished his life-long friendships with his Coast Guard classmates and participated in veterans’ organizations with pride.
Dennis married Nita Jackson in 1984 and they were transferred to Long Beach to serve out the remainder of his 22-year Coast Guard career.  Their daughter Laura was born in 1987 and he retired honorably in 1988. He soon began a second career of service to others as a financial advisor, one he excelled at for the next 25 years. Dennis liked to say that he saved people physically and fiscally.
Dennis enjoyed traveling to Hat Creek to fish with friends. He loved listening to live music and attending local sporting events, whether his daughters were playing or not. He and Nita met on a tennis court and played tennis together for many years. He was always a loyal Giants fan. Maui was his favorite home away from home and he and Nita enjoyed escaping to their little island paradise.
Dennis is predeceased by his parents; sister Cheryl; Uncles Jack, Lawrence, and Henry Parker; Aunt Elsie (Gianoli) O’Connell and eight other Gianoli aunts/uncles. He is survived by his loving wife, Nita; daughters Joanne (Matt), Judy (Scott), and Laura (Ryland); grandson Oliver; nephew Tyson; sister Penny; cousin Roberta; Aunt Frances; and the Gianoli/Parker cousins whose company he enjoyed.  A Celebration of Life will be held on April 13th from 12-3pm at Alexander Valley Hall. Thursday morning, April 14, the family is hosting a Walk to End Alzheimer’s on the Healdsburg Plaza (8:30–10:30).  Please join us!  Donations can be made to Alz.org, Cloverdale schools (cusdcare.org) or the Cloverdale Historical Society (cloverdalehistoricalsociety.org) in memory of Dennis W. Parker.