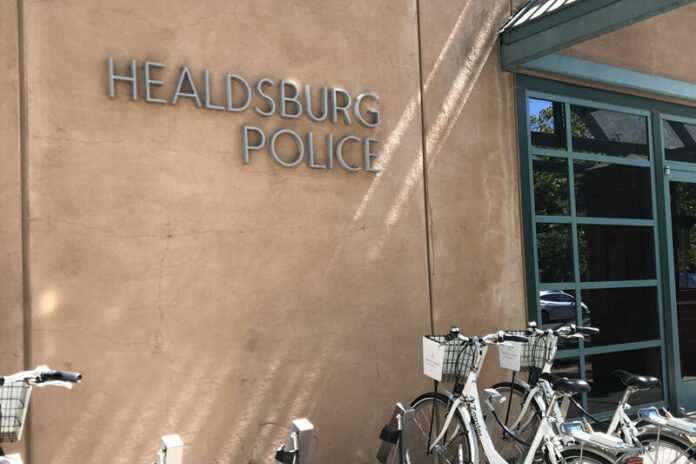 7:05 a.m. Vandalism to a vehicle on Healdsburg Avenue. A catalytic converter was taken from a company vehicle. Report taken.

11:39 a.m. Drunk driver on Healdsburg Avenue. A black car backed into a tree, no apparent injuries. The male driver was arrested for DUI and transported to the county jail.

2:18 p.m. Reckless driving on Fitch Street. Officer was unable to locate the driver.

9:28 a.m. Disturbance on North Street. Reports of an altercation between a male and female. A female was heard screaming. Two officers responded and heard nothing and there was no response at the door.

11:38 a.m. Petty theft on Healdsburg Avenue. A male subject stole a beer. The subject was cited by police and released.

7:18 p.m. Unwanted subject on Prince Avenue. The same male subject from the day before has been coming onto the field and making the softball team feel uncomfortable.

8:18 p.m. Drunk driver on Healdsburg Avenue. The reporting party suspected that a male who was trying to back out of a spot was intoxicated. Officers responded and the male subject was arrested for DUI and transported to the county jail.

9:52 p.m. Disturbance on S Fitch Mountain Road. The caller reported that she was being threatened and was allegedly verbally attacked.

11:14 a.m. Vandalism to a vehicle on Matheson Street. Caller stated her tires were slashed.

4:10 p.m. Vandalism to a vehicle on Prince Avenue. A vehicle’s front windshield was smashed.

8:52 p.m. Disturbance on University Avenue. A mandated call was received to inform the police department that a man was in a physical altercation with his brother and sustained visible injuries. The man did not want to press charges.

10:45 a.m. Disturbance on W. Grant Street. The caller stated that a fight broke out between her two sons and then disconnected. Dispatch spoke with the caller again and determined that no medical attention was needed. The two sons had been fighting over e-cigarettes. All parties involved were given counsel.

2:34 p.m. Disturbance on Vine Street. A subject came into the police department to report that he was in a verbal altercation with a bus driver.

5:39 p.m. Probation violation on Front Street. Reporting party stated that while he was driving by, there was an altercation between a large group of juveniles and an older man. The older man was allegedly holding a knife. Two officers responded and the man was arrested and transported to the county jail.

8:05 p.m. Disturbance on Grove Street. Reporting party stated she was in an argument with her dad who allegedly threw rocks. The caller said she was kicked out of the house. Two officers responded and the situation was resolved.

9:54 a.m. Coroner’s case on First Street. Caller reported her mother wasn’t breathing and she started CPR. Two officers responded and confirmed that the mother was a hospital patient and death was due to natural causes.

1:41 p.m. Disturbance on Grove Street. Caller stated she was afraid of her mother and locked herself in her room. The mother came home in the morning with horse feces on her hands, and allegedly put her hands in her daughter’s face to wake her up. Mother has a history of physical altercations, but nothing physical happened. Two officers responded and the issue was resolved. The CORE team will follow up.

5:16 p.m. Disturbance on Matheson Street. Reporting party stated her son yanked her purse, grabbed her phone and threatened to kill himself. She said she wasn’t physically harmed but wants to press charges. She said he may have a warrant out of Santa Rosa. The male subject was transported to the hospital, cited and then released.

6:14 p.m. Disturbance on Center Street. Two parties appeared to be in a verbal altercation. Both parties were counseled.

11:13 p.m. Drunk driver on Montage Way. Reporting party called to advise that a man who came in appeared intoxicated and then left and went towards his gray Honda.

11:18 p.m. Drunk driver on Healdsburg Avenue. Officer initiated activity. An officer was flagged down by a subject and said they saw a man who matched the description of the Montage Way subject. The man was arrested and transported to the county jail.