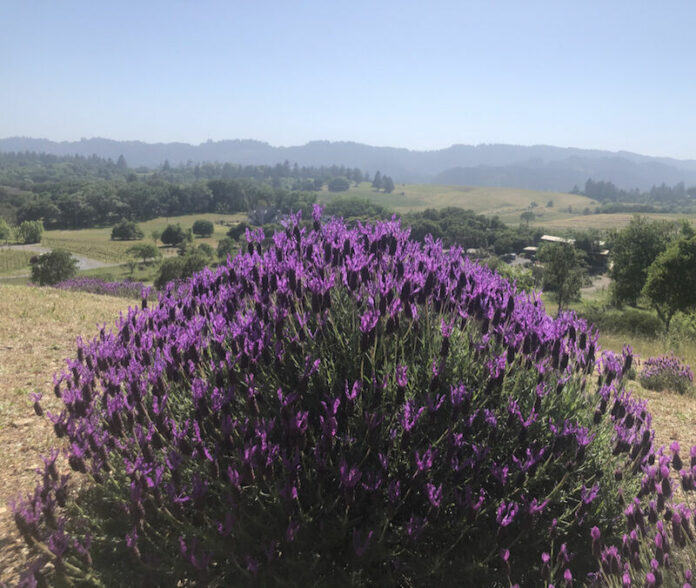 This week in H’burg: Lavender

This Week in H’burg is a weekly column featuring photos and fun facts from local photographer Pierre Ratté. Each week we’ll feature a new photo from Ratté along with a fact about the subject matter of the photo.
Amazingly, lavender is in the mint family. I personally think of mint as a pick-me-up, and lavender as a relaxant, however they come from the same family of plants: Lamiaceae. The botanical name for the lavender pictured above is: Lavandula stoechas, commonly called Spanish lavender. It is distinguished by its deep violet leaves, which form a pineapple like flower. French lavender, Lavandula dentata, has a paler color, less purple, more lavender and a narrower flower. It’s a bit confusing to learn that Spanish lavender is native to France, while French lavender is native to Spain. Spanish lavender prefers rocky and sandy soil found in France, while French lavender prefers limestone soils found in Spain. To make matters even more confusing, ‘true lavender’ is called English lavender, or Lavandula angustifolia. Except of course when it is grown in France, when it is called French lavender. Culinary lavender is generally ‘true lavender,’ or English lavender, or Lavandula angustifolia. Whatever the name and species of lavender, all appear to be of European origin and used early on for perfuming and medicinal purposes. In Roman times, it was a prized perfume, with a pound of flowers selling for a month’s wages.
Queen Elizabeth particularly liked lavender jam, and teas flavored with lavender. Though we associate it most with French cooking, it was reportedly not referenced in French cooking until the turn of the 20th century. We commonly see culinary lavender in herbes de Provence, but this is the American version of the spice mix. Herbes de Provence in France does not include lavender. Herbes de Provence in France is traditionally comprised as: thyme, basil, rosemary, tarragon, savory, oregano and marjoram.
Pierre Ratté posts a daily picture on Instagram, Facebook and TodayinHburg.com. He can be reached at [email protected] His book “100 Days Sheltering-In-Place” can be purchased at Levin’s and Copperfield’s bookstores, TodayinHburg.com or Amazon.com.