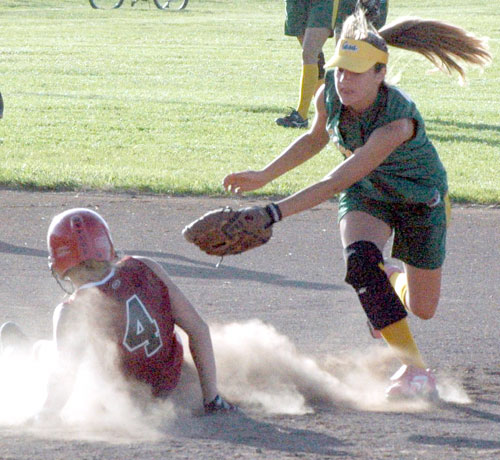 The Lady Greyhound varsity softball squad didn¹t play their best
ball of the campaign last week, but they did manage to win two
games in five outings.
Healdsburg posted wins over Windsor, 6-3 and Kelseyville, 12-1,
but finished the busy week with losses to Casa Grande, 10-0, 4-1
and Ukiah, 2-1. The mixed bag left the team with an overall mark of
13-8 and 5-6 in the SCL. At press time, the ladies were preparing
to wrap up the league season on May 16 at Petaluma.
³Overall, we didn¹t play very well last week, especially in the
double-header against Casa Grande,² Healdsburg coach Brian Osborn
said. ³We¹re having some problems scoring runs right now and we¹re
hitting the ball right at people. On a positive note, we do have 13
wins and have a chance to finish the season with less than
double-digits in losses so we¹ve surpassed even our own
expectations.²
The ladies are on the verge of grabbing their second straight
North Coast Section 2A playoff berth and expect a decent seed in
next week¹s tournament.
³I¹m hoping our record (7-0 in 2A games) and win over Petaluma
helps get us a home game in the playoffs,² noted Osborn. ³I¹m
expecting about a fourth seed.²
On Tuesday, ace hurler Jennah Peavler went the distance to notch
a 6-3 win over host Windsor. Alyssa Baroni laced a clutch, two-run,
pinch-hit triple in the fourth inning to break a 2-2 tie and it was
all Peavler (7 IP, 4 hits, 8 Ks) would need the rest of the way.
Leading hitters included: Peavler (2 for 3, 2B), Charlene Andrews
(1 for 3, 2B, 2 RBIs), Christina Leahy (2 for 3, 3B, 2 RBIs) and
Baroni (1 for 2, 3B, 2 RBIs).
Taylor Dericco tossed four strong innings at Kelseyville on
Wednesday, with Lily Tomkovic closing it out in mop-up duty in a
12-1 win. Pacing the attack were: Baroni (2 for 4, 4 RBIs), Mary
Minaglia (2 for 4, 2 RBIs) and Tomkovic (1 for 1, 2 RBIs).
The Ladies traveled to Casa Grande for a forgettable twin-bill
on Thursday. The Healdsburg gloves let starter Taylor Dericco down
in game one, committing an uncharacteristic six errors in the first
inning in a 10-0 loss. Devon Dericco, Leahy and Samantha Erickson
each had hits for the Hounds. Peavler kept her team in the game in
the nightcap, but Casa broke a 1-1 tie in a three-run fifth to pull
out a 4-1 win. Leading hitters included: Erickson (2 for 3, 2B,
run), Peavler (1 for 3) and Tomkovic (1 for 1, 2B).
On Saturday, the ladies dropped a well-played, 2-1 decision at
Ukiah. Peavler was locked in a duel with Wildcat starter Lindsay
Kiely, but five walks and one hit batsman was just enough for Ukiah
to emerge the winner. Pacing the attack for Healdsburg were:
Erickson (1 for 3), Andrews (2 for 3, 2B, 2 RBIs) and Peavler (1
for 3). Brooke Gustely swiped her 18th bag of the season, tying her
with Devon Dericco for the team lead.

Hounds in the Running as Winter Seasons End